Chrystia Freeland: $4.3B TPP Compensation For Dairy Industry Under Review

MANILA, Philippines — The new Liberal trade minister says the $4.3 billion compensation package the previous Conservative government made to dairy farmers to counter any ill effects of the Trans-Pacific Partnership is not a done deal.

International Trade Minister Chrystia Freeland said that package is under review, as part of the Liberal government’s promise to consult with Canadians on the massive 12-country Pacific Rim trade pact and put it to a vote in Parliament.

For now, she said her government is not bound by the compensation commitment of the Conservatives, which was made by its cabinet during the federal election campaign.

Freeland’s assessment came in Manila on Wednesday at the same Asia-Pacific Economic Co-operation leaders’ summit where U.S. President Barack Obama made an impassioned pitch to the leaders of the 12 TPP countries — including Prime Minister Justin Trudeau — to ratify the deal as quickly as possible.

The APEC gathering brought together all 12 TPP countries for the first time since the historic deal, which covers 40 per cent of the global economy, was announced on Oct. 5. 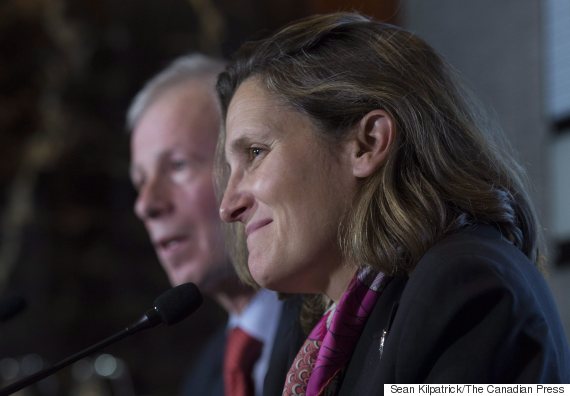 Freeland’s comments are not likely to be well received by the Canada’s dairy industry, which fought hard to protect its supply management system.

During the campaign, the Harper cabinet approved the $4.3 billion compensation package over 15 years to help the dairy industry cope with losses from the additional 3.25 per cent of foreign imports that Canada allowed under the TPP.

“We appreciate the importance of compensation to affected sectors,” said Freeland. “It would be very inappropriate for us to commit to specific packages given that we’re actually reviewing the agreement overall.”

Freeland said she had good conversations about the issue with Agriculture Minister Lawrence MacAulay and Economic Development Minister Navdeep Bains before leaving Canada.

“We are reviewing now what the compensation plans will be, and I am not going to make commitments for my fellow ministers who are back home in Canada.”

Freeland reiterated what the government has been telling its fellow 11 TPP partners in Manila: that it is pro-trade, realizes the importance of the deal to the Canadian economy, but that it made an election campaign promise to put the deal before the country.

She said she is also telling them “that the TPP was not negotiated by our government, it was negotiated by the previous government and our job now is to carefully review the text and consult.” Freeland said she is encountering “great understanding” of that position among its TPP partners.

“We are reviewing now what the compensation plans will be, and I am not going to make commitments for my fellow ministers who are back home in Canada.”

Two hours earlier, Obama offered a more powerful statement on the need to get the TPP deal done once and for all at a luncheon for the pact’s leaders and trade ministers — which included Trudeau and Freeland.

“TPP is at the heart of our shared vision for the future of this dynamic region,” Obama said.

“Today, we’re going to discuss the road ahead to ensure that TPP is enacted in each of our countries as swiftly as possible. Obviously, execution is critical after we have arrived at the text.”

Obama said called the pact “the highest standard and most progressive trade deal ever concluded,” citing its strong protections for workers, prohibitions against child labour and labour, and environmental protection — all of it enforceable.

“The politics of any trade agreement are difficult,” Obama noted.

“The fact that everyone here stepped up and made some hard decisions that are going to pay off for decades to come, I think is testimony of the vision that was reflected.”

Obama and Trudeau will have their first face-to-face meeting on Thursday during the final day of the APEC summit. In addition to the TPP, they will have a packed agenda that includes the war on Islamic militants, the refugee crisis and the fight against climate change.

Trudeau started his day of meetings with a roundtable with 15 Canadian business leaders.

“We know that trade is fundamentally good for Canada and for Canadians,” Trudeau told them. “We need to make sure that we’re connecting with the world.”

While there might be some daylight emerging between Canada and the U.S. on trade, Foreign Affairs Minister Stephane Dion made it clear that the two countries were on the same page when it came to pushing for a binding climate change agreement at the Paris summit in two weeks.

Dion called climate change a “cancer” and pledged to work alongside the U.S. and France for a strong deal.

“To disassociate climate change and the economy, to have a classic discussion on the economy as if we didn’t have this problem, this relationship with the planet — it’s passe now.”