APEC Summit 2015: Trudeau Aims To Bring Canada Back To Asia

What The Liberals' Tax Promises May Mean For Your TFSA

Retirement May Be A Lot Greener For These Boomers

Trudeau will be trying to make inroads in a part of the world that Canada has repeatedly been accused of ignoring. And he will be under pressure to take concrete steps towards wrestling the mother of all trade deals to the ground — the Trans-Pacific Partnership that spans 12 countries and 40 per cent of the global economy.

Trudeau arrived at the Asia Pacific Economic Co-operation summit in the Philippine capital, where he will have another networking opportunity with a diverse 21-member group that swings wildly between democracy and dictatorship.

The two-day APEC summit begins Wednesday, under the heaviest security operation in this country’s history. Trudeau will mingle with leaders from several south Asian countries as well as the United States and Australia. Vladimir Putin is reportedly taking a pass on behalf of Russia. 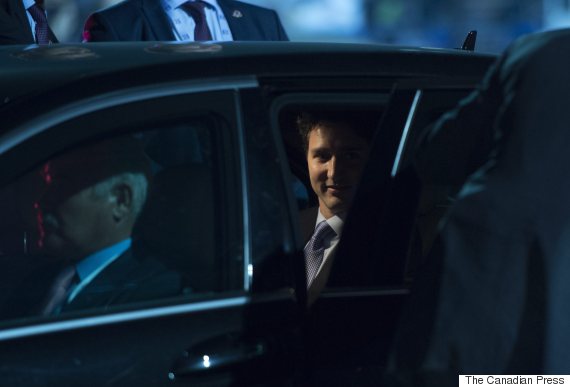 Trudeau arrives at the airport in Antalya, Turkey to fly to the APEC Summit in Manila, Philippines. (Photo: Sean Kilpatrick/CP)

Many of APEC’s members will be familiar to Trudeau because they are part of the G20, where Trudeau started his week at its leaders’ summit in Turkey.

China’s President Xi Jinping paid a glowing tribute to Trudeau because of the legacy of his father, Pierre, whose groundbreaking 1970 decision to open diplomatic relations with the Communist country paved the way for the Nixon administration in Washington to follow suit two years later.

But it was Trudeau’s meeting with Indonesian President Joko Widodo that marked a significant start to his long road to boosting Canadian trade — and profile — in other potentially lucrative parts of Asia, a priority he has laid out for his new cabinet.

Trudeau’s early morning meeting with Widodo last Sunday was his first face-to-face with a world leader outside Canada.

“I look forward to strengthening the already strong ties between Indonesia and Canada. There is much we can build on,” Trudeau told the leader of the world’s most populous Muslim country.

Trudeau cited the predictable economic and business ties and added something else: “working with a strong, moderate Muslim country to continue to promote the kind of values around the world that I think the world needs promoted.”

“I look forward to strengthening the already strong ties between Indonesia and Canada. There is much we can build on.”

The gesture fit the theme of inclusiveness, from economic to cultural writ large, that the 43-year-old prime minister has advanced in the election campaign and his brief two weeks in power.

While China is inevitably the focus of attention, one analyst says Trudeau would be wise to set his sights on Indonesia, as he embarks on his Asian outreach.

“It’s not China, it’s Indonesia which is going to be one of the powerhouses of economic growth in that part of the world,” said Fen Hampson, the head of the global security program at the Centre for International Governance and Innovation in Waterloo, Ont.

Foreign Affairs Minister Stephane Dion, who has been in Manila for APEC meetings prior to the leaders’ summit, said Tuesday that Canada now has one major way of connecting to countries in this region — its determination to be part of the global solution on climate change.

“They call it the new normal,” said Dion. “The fact that Canada insists on the fact that now we want to be part of the solution regarding climate change is also perceived as good news.”

Dion pointed out that Indonesia is dealing with raging forest fires that have cost $9 billion in damage while the Philippines have been ravaged by typhoons.

David Mulroney, a retired Canadian diplomat who served as ambassador to China, said APEC may seem boring, “but it’s very focused on the nuts and bolts of building trade in the region.”

And part of that trade agenda should be finding a way to bring China into the TPP fold, because it’s just too big to leave out.

“The holy grail for APEC was always the transpacific trade agreement,” Mulroney said. “We sort of have that with TPP, but its significant omission is that it doesn’t include China. That’s a real problem for everybody.”

International Trade Minister Chrystia Freeland, who has also been in Manila for the pre-APEC meetings, said Tuesday she’s telling Canada’s 11 partner countries the same thing the government is telling Canadians: that it wants to hold consultations and a debate in Parliament on the TPP.

She emphasizes that the text of the deal came out only one day after the government was sworn in.

“We have met with very great understanding and appreciation of that Canadian position,” she said.